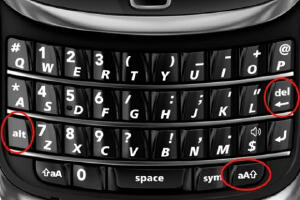 Doing a battery pull (removing the battery) on a BlackBerry phone has been the most common way to fix common BlackBerry problems like screen freezes, cursor lagging and what not, or, more annoyingly, rebooting a BlackBerry phone has been the way to unwrap a newly downloaded app or to properly say goodbye to a recently deleted app. Why is it required to restart a BlackBerry every time an application is uninstalled or deleted? Question to be answered later I guess.
I wrote this article to show you how to reboot a BlackBerry phone without removing the battery (or doing a ‘battery pull’ as it is often called). Although most people already know how to do a soft reset but that’s just most people.
To restart your BlackBerry using only the keypad, you will need to press three buttons simultaneously, the key combination is ALT, SHIFT and DEL as can be seen from the image below. The SHIFT button is the one that has the characters aA on it with an upward pointing arrow. If there are two SHIFT keys on your keypad, you will be making use of the right one for soft resets (when I say right one, I mean the one on the right hand side), right. How To Properly Execute a Soft Reset

PS: It is not my concern how you intend to coordinate your fingers to be able to hold all three buttons at once. It could be tricky at first, but you’ll get a hold of it after 3 or 4 restarts. If, on the other hand (figure of speech), you have sweaty or short fingers and would like a guide or trick on how to perform the soft reset procedure swiftly even while blindfolded, check it out here: Easiest Way To Hold ALT SHIFT DEL For a BlackBerry Reset